Whining about protesters is all the rage this week among those who don’t want to mention the impending overturning of Roe v. Wade. Claiming these spontaneous, harmless protests are “protoviolence” and beyond the scope of the First Amendment is the first step to normalize the looming crackdowns when the (illegitimate) SCOTUS opinion officially comes down.

I don’t really want Maine to return to Massachusetts, but a lot of states should be consolidated, especially the prairie states which produce nothing more than senators, grain and natural gas.

This marks twenty years of me making fake Valentine’s cards for cartoons. I might’ve missed several years when I was on the NYT grind, so don’t quote me on that.

I had a cold this week that was surprisingly not COVID. While I don’t recommend getting sick, any excuse to avoid following the news makes for a better week.

Mitch’s shady late night impeachment shenanigans should clue people in to the G.O.P.’s project to undermine democracy, but if the last twenty years haven’t, I don’t know what will.

I thought nothing could be worse than drawing Ted Cruz during the 2016 primaries, but then he went and grew a teenager’s graying patchy beard. 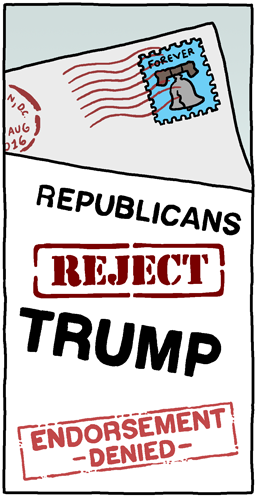 Republicans are abandoning the Trump Train, and Clinton’s rolling out the welcome mat. I hope her tent is big enough to keep John Negroponte far away from wherever the Clinton campaign’s foreign policy is being written.