I didn’t mean to start spooky season yet. But horrific photos and reports of U.S. Border Patrol on horseback assaulting and detaining refugees seeking asylum sent a chill down my spine.

The refugees, particularly those from Haiti in this case, are dealing with a series of disasters that we have caused, both directly and indirectly. In any case, all refugees should be let in and given asylum. We have the space and resources, and it’s time for leadership instead caving to fascist scaremongers like Tucker Fucking Carlson. It’s good practice too. There are about to be a billion more climate refugees in the years ahead, and a good chance you and I will be among them.

The regular cops are still wilding out, and adding the Republicans’ secret police to the mix right as pandemic relief expires is a recipe for (even more) disaster. Oh, and Democrats also voted to keep the Afghanistan War going on to its third decade. Fun week!

A massive pandemic isn’t going to stop the administration’s grifts, and Mike Pompeo is taking full advantage while every normal person is focused on not dying.

I didn’t watch the State of the Union this week. Felt good, but the Iowa Dems made it shitty. Shittiness finds a way!

A lot of bootlickers worked up an appetite this week arguing that our immigrant internment camps aren’t quite concentration camps. With another term, the differences will be even more negligible.

With Kirstjen Nielsen Nazi ass out on the curb, Stephen Miller has free reign to shape this administration’s reign of terror on immigrants. A truly dispicable toad. I honestly can’t believe he’s still around when Steve Bannon got bounce so early.

Speaking of now-former secretary Nielsen, here’s a headline cartoon I did for The Nib just before she announced her resignation:

It’s probably because he’s been largely out of the spotlight, but now that the media starting to point out he’s the racist wizard behind Trump’s curtain, Trump will certainly bristle at the idea he’s not in charge.

Trump walked back his threat to shutdown the border, which leads me to believe Stephen Miller got locked in a White House bathroom and couldn’t whisper super-duper racism into his sundowning ear. 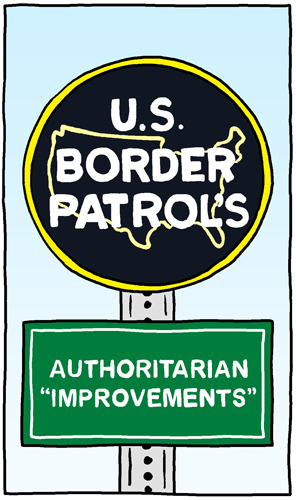 These goons aren’t just terrorizing the border. I’ve been stuck at checkpoints 75 miles from the Canadian border where they’re obviously fishing for undocumented immigrants from non-Canadian places.