The only time I faced multiple rounds editorial notes while drawing “The Strip” for the NYTimes was during the siege of Gaza in 2014. If this comic had to go through the same process, I’m pretty sure only the final panel could’ve gotten through unchanged.

(panel 1 – Title that’s spelled out on an eye chart.)
Both Sides Blindness
(panel 2 – A sommelier examining a map of Israel’s expanding territory.)
sommelier, “It’s only apartheid if it’s from South Africa. This is a sparkling authoritarian ethnostate.”
(panel 3 – President Joe Bien at a lectern.)
Biden, “Israel has a right to defend itself. By saying nothing else, I’m merely IMPLYING Palestinians have NO RIGHTS.”
(panel 4 – A reporter writing and having an “A-HA!” moment.)
reporter, “The IDF’s actions sound indefensible … until I describe them with a passive voice!”
(panel 5 – A proudly ignorant person.)
person, “An open-air prison and a nuclear state with an arsenal funded by the United States are equal to me … a willful idiot.”
(panel 6 – An evangelical doomsday prepper clutching a Bible and a gas can in a bunker.)
prepper, “Who cares?! BOTH SIDES exist only to fulfill my Armageddon fantasies!” 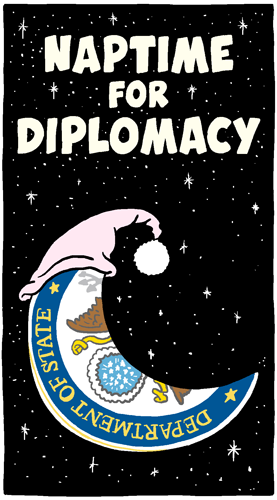 Rex Tillerson doesn’t like his job , and it’s the only relatable thing about the rich former Exxon executive. He’s already missed events  due to “fatigue” after less than two months on the job.

An hour before I finished this, it was announced that he’d attend the NATO meeting after all , but only after a week of criticism.

Patrons can read the comic now.