Since COVID’s still rippin’, there aren’t many options for sports fans who don’t want Long COVID to watch games. Stadiums and bars are out, and if you’re in the same TV market as the teams you like, the streaming options are blacked out.

The names of everyone featured in the comic aren’t stated explicitly, because they are tedious people who name-search and I don’t want to deal with them or their weird fans. If you can’t identify them, you have a healthier media diet than I do!

Consider this comic an attempt to alleviate some of the guilt I feel every time I plop on a baseball or hockey game. 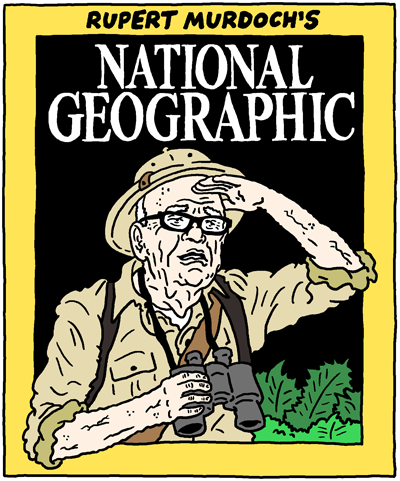 I was bummed when I heard Rupert Murdoch was purchasing National Geographic. I haven’t read it regularly in years, but it was a huge part of my childhood; right up there with “Highlights” and “MAD” magazine. Now that it’s owned by a climate change skeptic who’s also the progenitor of toxic cable and tabloid news, I won’t be picking it up the next time I’m waiting at the dentist’s office.