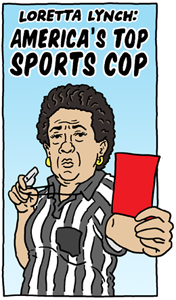 Like most Americans, my interest in soccer peaked with youth soccer (Go BYSA!) and only returns during the men’s and women’s World Cup tournaments. But anyone with a passing interest in the game can tell FIFA is terribly corrupt.

Last week’s FIFA arrests were surprising and long overdue. Awarding the 2022 World Cup to the sweltering desert nation of Qatar was more than a bad idea, it’s been deadly for the workers tasked with building the infrastructure for the games. It’s a shame corrupt banks aren’t subjected to anywhere near the same level of scrutiny as corrupt sports leagues.