Taking a break from pointing out Democrats are beefing it again to point out Republicans are still evil.

While letting deaths pile up to blame on Democrats this fall, Florida Governor Ron DeSantis is doing lots of dumb stunts to whip up the base, and literally whip anyone who’s not his base.

Kemp’s getting the spotlight, but Republican governors and legislatures are pulling this stuff across the country. End the filibuster and pass the “For the People Act” before it’s too late.

ICE and the Postal Service are still run by rogue Trumpers. Seems like something a party with a trifecta could undo.

And they haven’t even gotten relief out the door. They’re taking the “honeymoon” thing a little too literally.

Besides stealing an election, sabotaging the Postal Service will result in people not getting medicine, and countless other essentials needed to survive the pandemic, or in general. They don’t care about murder, but killing the one part of the economy that was still kind of working probably isn’t in their own self-interest. Almost like they didn’t think this through! 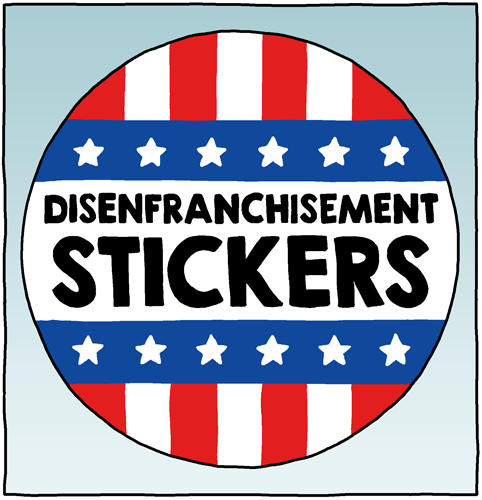 Shelby v. Holder gave Republicans the green light to go hog wild on voter suppression. If their efforts can be overcome by huge turnout next week, one of the first things that should be done in the new Congress is to restore The Voting Rights Act to full force.

Preclearance was the only thing keeping these anti-democracy goons at bay. 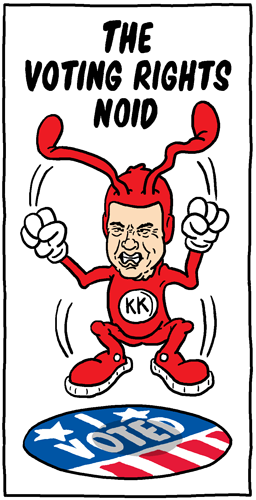 Become a patron and support this strip for as little as a dollar a month.

Kris Kobach has a voter suppression fetish. I’d say it’s the only way Republicans can win elections, but the inept Democrats seem to be actively helping, too.

If you’re too young to remember Domino’s Noid commercials, it has a fascinating and tragic history.