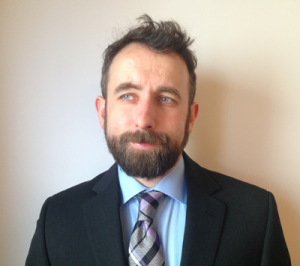 Brian McFadden grew up in Brockton, Massachusetts, a city in the suburbs south of Boston.

He studied mechanical engineering at Johns Hopkins University, where he began publishing cartoons online in 2001.

Those cartoons became the weekly comic strip, “Big Fat Whale,” which ran in alternative newspapers across the nation including The Boston Phoenix, Portland Phoenix, Cleveland Free Times, and Cleveland Scene. The best of those cartoons can be found in the self-published book, Fun Stuff For Dum-Dums.

McFadden drew “The Strip” for The New York Times’ Sunday Review from 2011 through 2016.

In addition to his comics, his illustration work has appeared in GQ and The Boston Phoenix.

His most recent cartoons can be found at GoComics and The Nib, as well as Daily Kos, and Funny Times. Supporters on Patreon get to see those comics before it appears anywhere else. He self-syndicates the strip and interested publications should contact him if they’d like to feature it.

The 41-year-old McFadden works from his apartment in Jamaica Plain, Massachusetts, where he lives with his wife and their cat, Gizmo.